Eliza Jane Bowman
After an adventure at the grocery store with my roommate Rose, we come home with a bag full of ingredients and we make something. Then we put on a a really bad action movie, or sit with the cat on the couch and scrutinize our pallete's response. Here are the results.

This months Daring Bakers Challenge was certainly that, a challenge. I enlisted the help of my best friend and roommate, Rose to aid in the process, and generally make sure I didn't miss a crucial step. I also made one HUGE MESS. 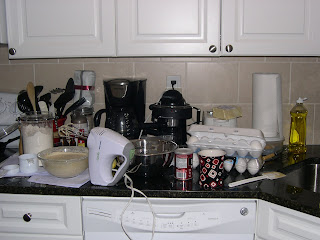 The Opera Cake was described mandatory-ly light and flavorful--of which I was happy--it is spring after all!--and so I chose Lemon and Raspberry for my flavors, well, actually I would have chosen Orange and Almond as I have been searching for an opportunity to make and orange-almond cake for about 2 years now, but when I asked the opinions of the men who would be eating this cake, Jake, John, and Gio--they all unanimously voted for Lemon Raspberry over my Orange Almond idea. All well, next time...


An opera cake is an elaborate layer cake, made from sponge cake soaked in a flavored syrup and buttercream. Layered, with a glaze on top.


For the cake I decided not to go with the recipe given and instead substituting a fruitier cake that teamed up much better with my lemon/citrus-y theme. This recipe can be seen below.


Heat milk in medium saucepan over medium heat to 150°F. 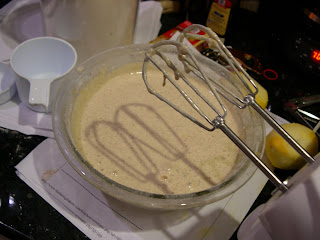 Pour batter into pan.
Bake cake at 375 until tester inserted into center comes out clean, about 10-15 minutes. Spread kitchen towel on work surface; cover with parchment. Sprinkle parchment lightly with powdered sugar. Run knife around edge of pan to loosen cake. Invert hot cake onto parchment. See picture below of me having much fun flopping cakes out of pans at high speeds! 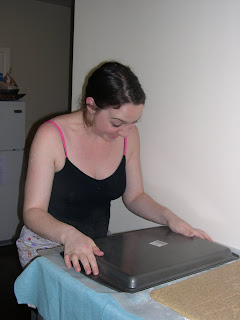 Peel parchment off top of cake.
After making the cake, let it stand and cool for a while, then cut in half, creating 4 rectangles. Cover and Set aside while you make the other components of the cake.

The first of which is the White Chocolate Lemon Mousse: The DaringBakers have made this portion of the cake optional, but I made it for 2 reasons. 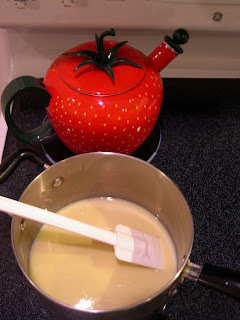 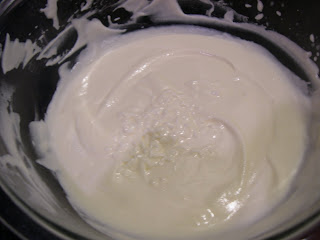 Buttercream (Note: I do not know exactly what went into my buttercream. I followed the recipe that follows to the T, then when I tasted it, knew that there was no way I was going to be able to stomach it--I just really don't like buttercream! So I added the juice of half a lemon, and the leftover lemon flavored white chocolate from the mousse, and called it a day--so, lord knows what the measurements were--sorry) 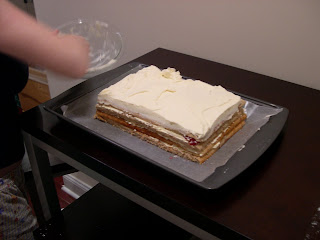 I personally added raspberries in each layer. Yum!
Then refrigerate and pour the white chocolate glaze over the top. Decorate--and serve!

(Note: It’s best to make the glaze right when you’re ready to finish the cake.) 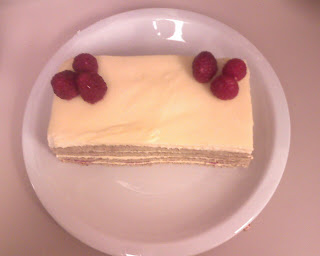 Cheese Cake Pops! (Ghetto Style)
So, pardon the late posting please. I am moving, and everything is in boxes...so you will get to see how inventive we can be with baking when the situation calls for it!
First of all, here is a picture of the final prodect, just so you know what we are getting at here: 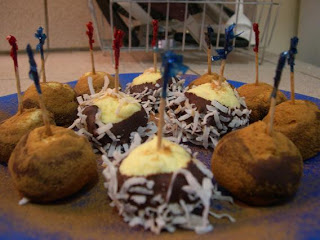 The recipe is as follows and I will insert fun pics and commentary as we go!

1 pound chocolate, finely chopped - you can use all one kind or half and half of dark, milk, or white (Alternately, you can use 1 pound of flavored coatings, also known as summer coating, confectionary coating or wafer chocolate - candy supply stores carry colors, as well as the three kinds of chocolate.)

(Note: White chocolate is harder to use this way, but not impossible)

Position oven rack in the middle of the oven and preheat to 325 degrees F. Set some water to boil.

In a large bowl, beat together the cream cheese, sugar, flour, and salt until smooth. If using a mixer, mix on low speed. Add the whole eggs and the egg yolks, one at a time, beating well (but still at low
speed) after each addition. Beat in the vanilla and cream.

Grease a 10-inch cake pan (not a springform pan), and pour the batter into the cake pan. Place the pan in a larger roasting pan. Fill the roasting pan with the boiling water until it reaches halfway up the sides of the cake pan. Bake until the cheesecake is firm and slightly golden on top, 35 to 45 minutes.

Well, I didn't exacctly have the pans availalbe for this, so we improvised with what was still unpacked..look at this ridiculousness! 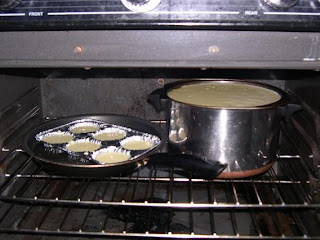 Remove the cheesecake from the water bath and cool to room temperature. Cover the cheesecake with plastic wrap and refrigerate until very cold, at least 3 hours or up to overnight. 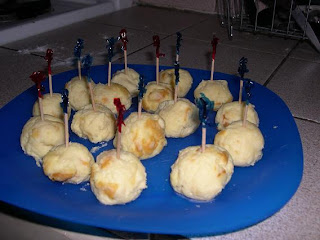 Carefully insert a lollipop stick into each cheesecake ball. Freeze the cheesecake pops, uncovered, until very hard, at least 1 - 2 hours. 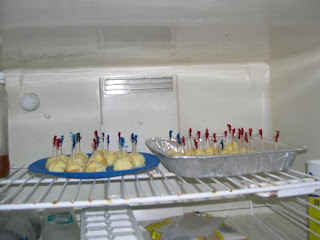 Alternately, you can microwave the same amount of chocolate coating pieces on high at 30 second intervals, stirring until smooth.

Refrigerate the pops for up to 24 hours, until ready to serv 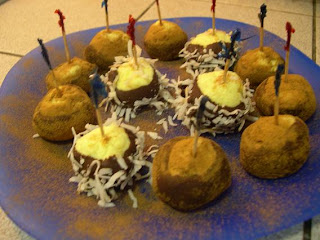 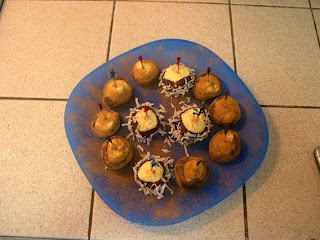 And they were appriciated by all! Yum!
Posted by Eliza Jane Bowman at 7:09 AM 1 comment:

Unlike most people I have ever met (me being a northern girl my whole life) I love grits.

I always liked grits well enough, but I first learned to really love grits when I moved to New York and discovered all of the "southern style" brunch joints. My two favorites which are Bubbies, and Kitchenette. Both of which serve the most desirable large side of grits, smooth and creamy topped with a pile of sharp cheddar cheese.--Yum.

After discovering this love of grits I did not previously know I possessed, I started splashing out a bit and seeing what else I could do with grits. Baked grits, grits with fried veggies, sweet grits, savory grits, hot grits, cold grits...the list goes on.

When I went home for this last Christmas, in order to make sure I had time to see all my friends, I planned a large brunch at one of my favorite brunch joint 5spot. 5spot is a great, slightly kitchy, quasi-themed restaurant. Every couple months or so they change their theme and, this is where the food gets amazing, each theme is based on a different locailty or geographical region. Over Christmas it was New Orleans. *nods approvingly* And it was here, at Christmas, that I discovered Grit Cakes. Crispy and Crunch on the outside, soft gooey and cheesy on the inside. Put syrup, jam, applesauce or fresh fruit on top and you have pure bliss.

I went home after that Christmas and decided I was going to make me some grit cakes. I looked at Emeril's recipe. Tried it--not bad--but not great, and now I have improved upon. Here it is.

Oil a large rectangular cake pan.
In a saucepan bring water and butter, seasoned with salt and pepper, to a boil.
Reduce heat to medium and whisk in grits. Cook, stirring constantly, 5 minutes.
Remove from heat and stir in cheese. Pour grits into cake pan, spreading them evenly, keeping them about an inch thick all the way round.
Cool and cut into cakes with a 2 1/2- to 3-inch biscuit cutter.

Now you can cook these cakes 2 different ways:
Enoy with eggs, fruit, fake sausage...just enjoy!
Posted by Eliza Jane Bowman at 6:05 AM 2 comments:

So last night, for the first time in ages, I came home before 11pm, as a matter of fact, I came home at 6:30pm. And my first thought was--I can make dinner! My second thought was--I haven't gone grocery shopping in weeks, and I really really don't want to leave the house. So I scoured the fridge and what I had where a few small button mushrooms that were still good, skim milk, parmesan cheese and rice. So I pulled out all these ingredients and went to work.


First I put the rice on to cook, with a tablespoon of butter, and left it to it's own devices. Then I turned to the rest.


I started with 2 Tbsps butter and 2 Tbsp minced garlic in a pan, letting is sit on the burner (on low) for about 5-7 minutes, poking and prodding at it every once in a while to make sure that all sides of the garlic were getting browned. Then I sprinkled 1 Tbsp of flour in the with the garlic and butter and added 1 1/2 cups skim milk. Then I sliced up the 5 mushrooms and put them in the still liquid sauce. Keep over medium-low heat stirring occasionally as the sauce thickens. Then as the sauce starts to thicken I added 1/2 cup grated parmesan cheese 2 pinches of whole rosemary, salt and pepper to taste, and just as the sauce was getting thick enough to serve I tossed in a spoonful of capers (that I stole from my lovely roommate) to top it all off.

Pour it over the steaming rice--and voila--you have a pretty tasty meal from practically nothing!
Posted by Eliza Jane Bowman at 5:29 AM No comments:

The Reason to Record Genius

I spend the holidays in the kitchen, cooking. As a matter of fact, when I am not curled up with another amazing book, either on my couch or in a comfy nook at The Strand, all my spare time is spent in the kitchen. Perhaps it is my affinity for warmth, or how my whole apartment becomes saturated with the smell of ginger, or squash or mushrooms frying in butter, or just knowing I have the ability to make a little feast all for myself, or for myself and my best friend, and have a little gourmet picnic on the the floor, that makes me love cooking; but whatever the reason, I do.

I have a real tendency not to use recipes, and I forget how on earth I concocted something that I ended up really loving. This tendency gets both on my nerves and on those of the people I cook for, because I find it very difficult to recreate and/or perfect my recipe if I can't remember what went into it in the first place! And so my resolution is to record my genius...or, lack there of, and so appeareth the blog.

So pardon the absence of a recipe this turn...but from now on out I will only post with recipes, how to make it better (or worse, as the case may be) along with the best way and place to eat. And I hope you all learn along with me, and enjoy being another mad scientist in the kitchen with me.